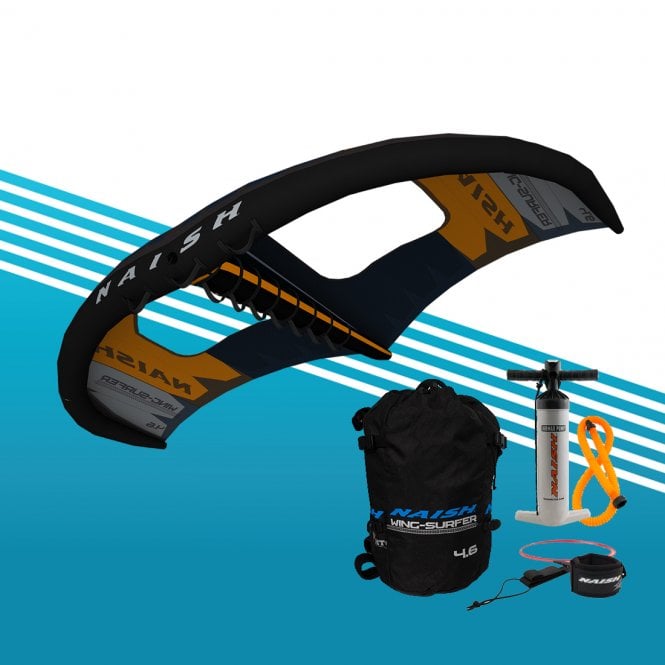 The Naish S25 Wing-Surfer takes the proven design of the first generation Wing-Surfer that is pure, simple and deeply rewarding to use; evolving it to include a range of sizes and a significant number of design improvements. But the changes made to the new Wing-Surfer are many and address the demands of a rapidly growing new sport.

The Naish S25 is the all-new wing-surfer from Naish.

If light wind performance is your thing, the 6.0 metre S25 is perfectly paired with a large surface area Naish hydrofoil set up. While at the heart of the new line up is the 4.6m representing a one-size-does-all for those that want one wing to cover the majority of conditions.

There are also some large changes to the Wing Surfer itself; thanks to the introduction of two large windows visibility is dramatically improved creating a safer and more engaging ride for both beginners and advanced riders.

While the diameters of the wings leading edge have increased dramatically in the centre of the wing and strut connection. This combined with an increase in the overall chord length for the canopy of the Wing Surfer provides a much more solid and rigid feel without the need for high pressure. On the water, the result is more power in the bottom-end yet increased wing rigidity in stronger winds. improving performance in both underpowered and powered conditions.

The canopy of the S25 wing is also different from the first generation of Wing Surfer, with a panel like construction and notably a deeper gusset between the boom and the canopy allowing a deeper draft on the canopy when in use. These improvements give a larger range of use for a given wing surface area making them more usable in a broader range of conditions.

What has not changed is the simplicity of the Naish Wing-surfer with it small packed dimensions, great value (each wing surfer includes a carry bag, Naish pump and coiled wrist leash), it just now offers more… more sizes... more power… more performance… more amazing sessions on the water doing what you love.

Be the first to review Naish S25 Wing-surfer. Write a review
Contact us with any questions you have about this product