X
This site uses cookies to provide and improve your shopping experience. If you want to benefit from this improved service, please opt-in. Cookies Page.
Accept Cookies
Free UK Delivery* (over £100*) - Finance up to 48 Months - Get 5% back as Loyalty Points on qualifying orders
Earn 5% back as Loyalty Points on Full Priced Items
Gift Vouchers Here
V12 Finance up to 48 Months
SALE 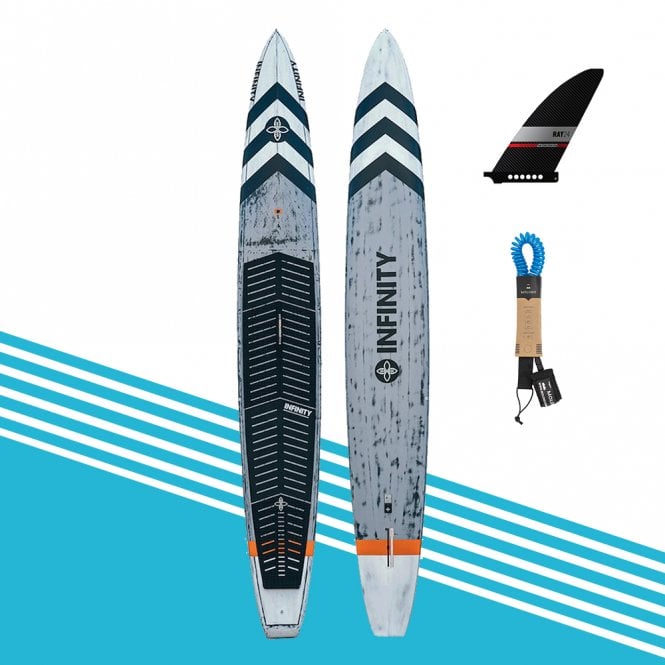 Infinity's all-new Blackfish is one of the most anticipated boards on the market. Infinity is always pushing the limits of the all-around race design and this latest version by renowned SUP designer Dave Boehne bleeds the lines of all-around versatility and flat water speed.

The Blackfish is now constructed using the all-new Team Elite Carbon construction, making the new Blackfish Infinity's most endurable and lightweight iteration yet.

The Blackfish is the all-around king and has influenced an industry with the original hybrid planning hull surf concepts applied to SUP race designs. This board has shown it's versatility year after year winning multiple world titles, gold medals, flatwater sprint wins, flatwater distance wins, and of course too many victories in the ocean and surf races around the globe.  Piloted under the feet of some of the words best Candice Appleby, Itzel Delgado, Juliette Duhaime, Tyler Bashor, Shae Foudy, Bernd Roediger and Kai Lenny. Just to name a few of the FREAKS!

Blackfish is the fastest board off the line, stable in all conditions, and a true one-board quiver to conquer anything mother nature throws at you. Many top board manufacturers have adopted the centre channel concept originally developed by Infinity in 2014 and now with input from the team of SpeedFreaks, everyone is still playing catch up. This Blackfish is like no other and features a completely re-designed nose and bottom update which takes the DNA of the Blackfish to the next level.

The new nose is a big deal and the first design change to the nose since it’s inception. The nose got taller, sharper, and has a more aggressive peak in the deck forming the shape of the nose. At first glance the nose looks upside down. The idea was to increase the efficiency of the board specifically in upwind conditions. The nose is taller with a sharper entry which “stabs” the swell in front while providing a finer and quieter entry in flat water which translates to increased flatwater glide. Increased efficiency grinding into chop plus flat water glides.

The bottom is a planning hull hybrid and is able to paddle in all conditions. The stability is built through the outline. The bottom features a rolled hull framing a unique inverse vee panel that releases cleanly off the flat tail exit behind the fin. The soft rounded hull moves and slips through the water rather than parting it. This makes for very fast “get up and go” and non-governing max sprint speeds. “Like skipping a stone” Blackfish likes to sprint off the line.

This "flat deck" original version is a true flat-style deck with just 1.5" of recess in the deck. This gives you a sure-footed stance and max width. Flat decks are the preferred style for riders who constantly go in and out of the surf, like to walk and move about the board a lot, and want a no-frills paddling experience.

If you paddle mostly in the ocean or a flat water area that gets changing seasons and conditions or flat water and simply want the best stability and speed,  Blackfish is for you and will be ready. SKU:
Be the first to review Blackfish 14 ft Flat Deck. Write a review
Contact us with any questions you have about this product