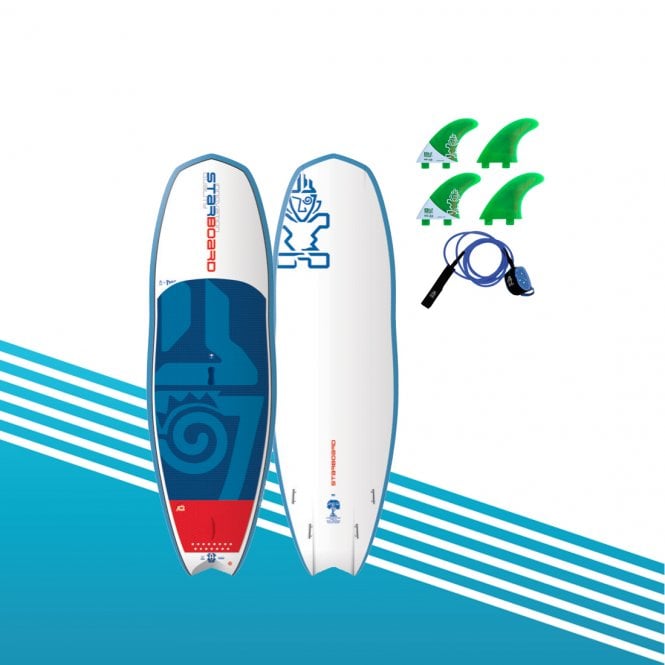 SKU: SS18HN86315SLBF
Item in Stock Item out of Stock | Dispatched within 24 hours
Want it by Thursday 9th April? Order within 23 hours, 31 minutes and choose Mainland UK - Next Day at checkout.
Loading...

The Starboard 8’6 Hypernut – part of Starboard’s ‘Innovation’ range – is the surf SUP, with a unique shape that is at once, fast, stable and reactive. Its inverted ‘Nut’ rails, tapering-yet-wide tail and quad fin set up give it unparalleled manoeuvrability and acceleration, while remaining nice and wide, providing heaps of stability, to create the ultimate surfing experience!

The Starboard 8’6 Hypernut Starlite’s ‘Hypernut’ shape borrows elements from the Starboard Nut, namely the inverted rails, taking them to their logical extreme and producing a paddleboard that rewards with even faster acceleration and tight turning. The high-volume nose coupled with its tapering tail gives the Starboard 8’6 Hypernut Starlite extra swing weight to drive off bottom turns which, coupled with the shortness of the board, lets you blast back up the wave, no trouble! This is assisted by the quad fin set up, which matches the width of the tail, channelling the water to a higher speed and enhancing acceleration. As well as this, the channel bottom shape - “Mono-concave feeding through to channel tail” - features a flatter rocker along the tail rail, further enhancing speed and drive, as well as creating a flat spot in front of the fins for extra acceleration. Its immense turning capabilities are bolstered even further by the PRO rocker featured down the centre of the board.

The Starboard 8’6 Hypernut Starlite employs ‘Starlite’ construction – meaning that the hull is wrapped in a combination of different fibreglass densities, providing the bulk of the board’s strength and durability. The standing area is reinforced by a 0.6mm layer of Australian Pine, increasing deck impact resistance and contributing to the overall rigidity of the board. The Starboard 8’6 Hypernut Starlite is further reinforced along the rails with a high grade, woven, Carbon Innegra, to maximise impact resistance and hull strength. In boards under 10 foot, additional glass reinforcements and Carbon stringers are added to the rail, to further bolster the board’s strength. The result is a board that is, at once, lightweight and well protected from scratches and dings.

Starlite construction also utilises a fully plant based Bio resin infusion, maintaining superior performance with a lower impact on the environment. In addition, Starboard use inverted EVA deck pads to avoid waste, meaning every second board will have a reverse colour combination from what is featured. So not only is the Starboard 8’6 Hypernut Starlite super strong and lightweight – it’s also kinder on the environment!

Be the first to review Starboard Hyper Nut 8ft6 x 31ft5ins Starlite - 2018. Write a review
Contact us with any questions you have about this product