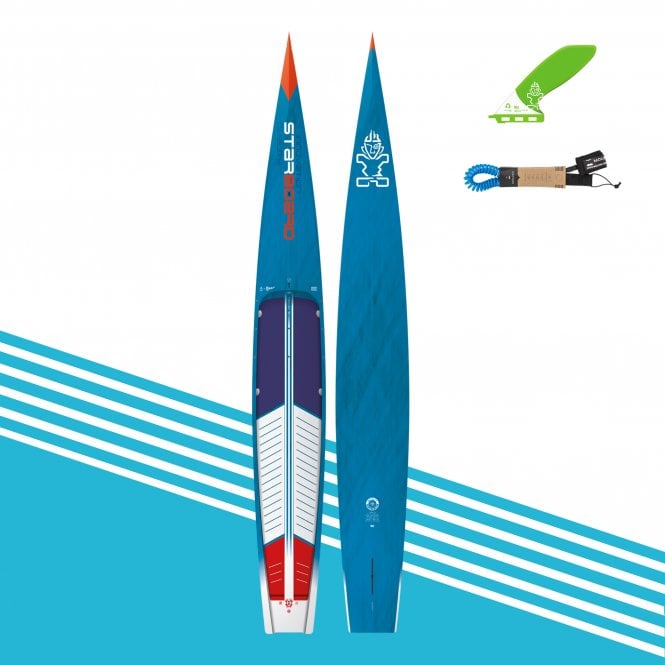 The Starboard Sprint 14 foot Carbon Sandwich has been heavily revised and improved for 2022 to ensure that it remains one of the fast paddleboards in the world. In the hands of elite paddlers like world champion Michael Booth, the Starboard Sprint has proved just how versatile it really is. The new 2022 improvements only increase the breadth of conditions in which this, the fastest in the Starboard race board line up, can perform at the highest level and win.

The largest difference in the Starboard Sprint is its new box nose that slices through the water with even greater ease while ensuring these boards remains remarkably stable in a variety of conditions. While the overall outline of the Sprint has been narrowed, reducing the wetted surface area and therefore drag, enabling you to accelerate faster and maintain a high top speed with great ease. Combined with the shallower bottom single concave, the lift is increased and so its top speed. The tail of the Sprint has also been raised helping the paddler to lift the nose sooner; perfect for buoy turns and when catching downwind bumps.

The Starboard Sprint Sandwich Carbon is the lightest and strongest race paddleboard construction from Starboard and is up to 500 grams lighter than the previous year. Utilising a super lightweight carbon biax laminated over the entire standing area as well as the entire underside of the board, high strength and low weight is ensured. While a stronger 150-gram biax carbon encases the nose and rail of each Allstar to ensure a balanced approach to strength and flex reduction.

Be the first to review Starboard Sprint 14 ft Carbon Sandwich - 2022. Write a review
Contact us with any questions you have about this product