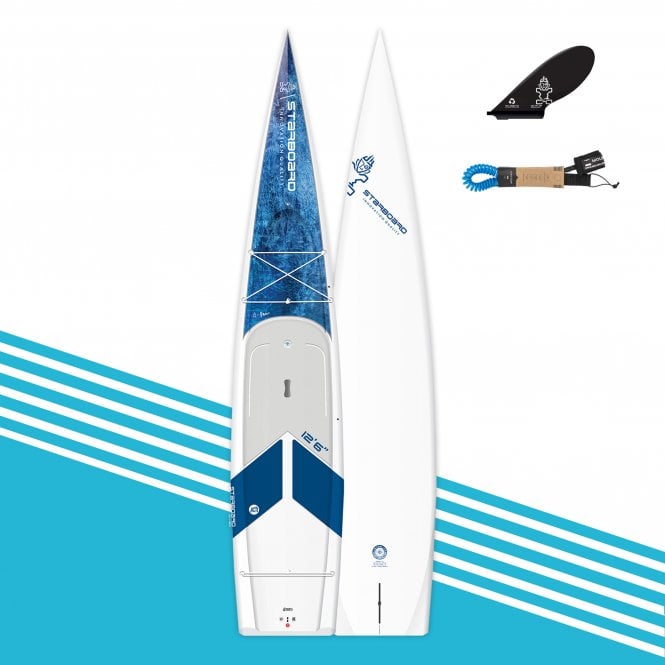 The 2022 Starboard Waterline Stand Up Paddleboard was developed to be the most pleasurable, focused flat-water touring SUP.

The narrow V-shaped nose of the Waterline cuts its way through the water effortlessly and leaves no trace of it glides forwards. Faster than many race paddleboards, the Starboard Waterline’s also tracks beautifully due to this sharp V nose section as it fixes the nose dramatically reducing sideways drift.

As the outline of the board traces back to the centre it begins to widen and then carries this width all of the way to the tail providing masses of stability. While the recessed standing area of the 14-foot long Waterline lowers the paddler's centre of gravity and also plays into the hands of creating even more stability. This lowered deck then traces back to the tail of the board allowing for a natural runoff for any water.

The Starboard Waterline comes fitted with a Starboard Race Ultra fin which is positioned in a US fin box that is sent very far back down the board which increases tracking. While the Race Ultra has enough depth to maintain good lateral stability while being maneuverable to turn.

The Waterline’s ability to move forward without leaving a trace is largely down to the cutaway tail shaped into the Waterline. This increases the speed of the board, as the water interacts with a smaller whetted planning surface. While the wide tail of the Waterline remains clear and is only called into play in choppy conditions when extra stability is required.

The 2022 Waterline is available in 3 distinct sizes:

Be the first to review Starboard Waterline Lite Tech - 2022. Write a review
Contact us with any questions you have about this product