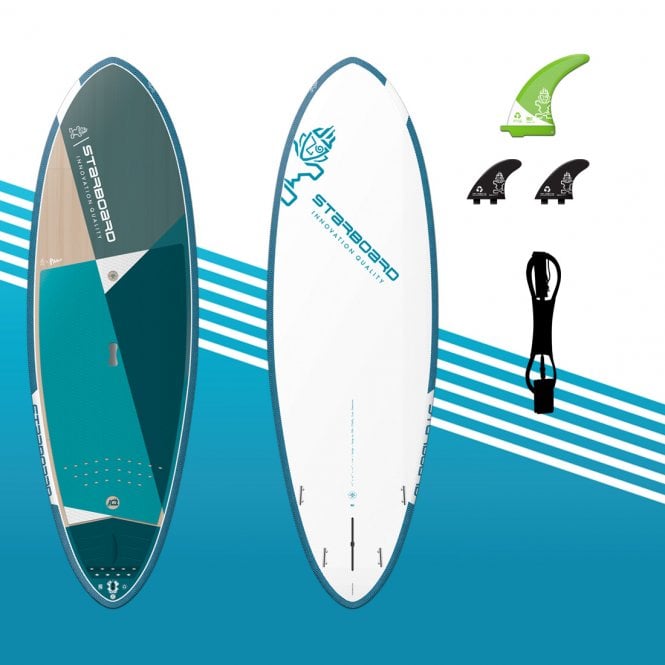 SKU: 4367
Item in Stock Item out of Stock | Dispatched within 24 hours
Want it by Tuesday 2nd March? Order within 3 hours, 17 minutes and choose Mainland UK - Next Day at checkout.
Loading...
Interest Free Finance AvailableFrom $24.28$24.28 per month

The Starboard Wedge range of paddleboards is brand new for 2021.

The Starboard 8’7 Wedge is the shortest in the Wedge line up by arguably one of the most capable as the thinner rails make the board respond and feel like a narrower board. The Starboard 8’7 Wedge, however, remains a stable high-performance shortboard for those that want to rip yet have a paddleboard with enough depth of character that is to make sessions longer.

The Starboard 9’2 Wedge is a huge improvement over what was an already excellent board in the form of the 9’5 Wide Point. The 9’2 is much more responsive to turn due to its new nose outline and thinner rail profiles, requiring less foot pressure to initiate turns.

A true cross over shape, the 10’2 Wedge is a superb all-rounder. Both fast and reactive as well as very controlled and stable when surfing. If you are looking for a paddleboard that can do those flat days but outperform all others of a similar length in the surf while delivering a ride as stable as this, then the 10’2 Wedge is for you.

The Starboard 11’2 Wedge is a board we know well as it is the 11’2 Wide Point with a fresh name and graphics bringing in inline with the rest of the Wedge range. With the new focussed Wedge range for this board to remain unchanged is testament to just how good it is and that it can hold its own in this easily accessible performance range of shapes.

Taking everything learned from and proven in the hugely successful Wide Point range of SUP’s, the new Starboard Wedge delivers more performance without compromising stability or volume. All of the Starboard Wedge boards are 32” wide to provide float and stability for beginner and intermediate riders as well as heavier paddlers that want a board that performs in a broad range of conditions.

The Starboard Wedge range features a number of improvements to increase performance. The first is the new shorter nose outline which makes it easier to turn tighter and respond faster with less effort. The nose rocker of the new Wedge has been lowered when compared to the outgoing Wide Point line making it easier to paddle into waves earlier and easier.

The monocave underside of the Starboard Wedge generates great lift and drive, channelling the water through to a double concave for a more sensitive rail feel. This culminates in a new rounded pintail to maximize the turning ability in these 32 inch wide models. This new pin tail makes it easier to engage and sink the tail for faster bottom turns and top turns with yet more drive. The Starboard 8’7 Wedge and 9’7 Wedge also feature a thinner rail profile that increases performance further still by increasing overall speed when surfing as well as better grip on the face of a wave.

All of the Starboard Wedge range feature a thruster fin set up with the exception of the 8’7 that offers both thruster and quad fin set up’s. The quad fin set up uses 4 side fins and gives fast acceleration and instant down the line speed as it does not have a drag from the larger centre fin.

All of the Starboard Wedge Starlite paddleboards use Starboard’s new improved Starlite technology which features the strongest rail construction ever made. Using ultra-durable, scratch and impact resistant woven 200g twill azure rail protection the new Starlite rails are unlike anything we have ever encountered; absolutely rock solid! The colour comes from the fibre itself, meaning there is no pigment on the rail, offering the best aesthetics and highest UV protection. While the EPS foam core has installed a pairing of T-stringers deck and bottom to protect against total breakage. These T-stringers are positioned close to the rail working like an i-beam in construction to endure heavy drops and strong wipeouts. Weights of the Starlite constructions are also very lightweight and represent real value when compared against the more expensive Blue Carbon construction.

We also think each of the Starboard Wedge Starlite boards looks fantastic. The graphics of the 2021 Wedge range makes the best use of the wood grain to give a finish and look which is simply stunning.

I recently picked up my 9'2" Starlite Wedge and I have to say Starboard killed it with their new size and refined model. I'm 6'2", 225 lbs, intermediate surfer, and had no problems first time out with it. I feel it could handle another 10-20 lbs easily. Deck is somewhat dome shape i guess to accomodate the 160 liters of volume as the rails are nice and thin. Rails are also ultra reactive as I could stand mid deck pumping down the line without catching an edge or lost of control. While stepping back on the tail, I felt the board loosen up for some skate like top turns. This is the ultimate board for bigger riders.