X
This site uses cookies to provide and improve your shopping experience. If you want to benefit from this improved service, please opt-in. Cookies Page.
Accept Cookies
Free UK Delivery* (over £100*) - Finance up to 48 Months - Get 5% back as Loyalty Points on qualifying orders
Earn 5% back as Loyalty Points on Full Priced Items
V12 Finance up to 48 Months
Free UK Delivery*
SALE 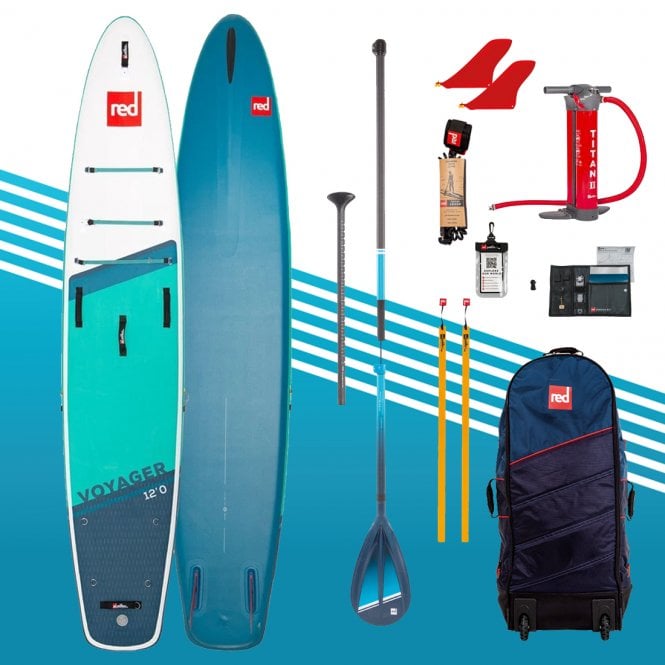 SKU: 5635
Item in Stock Item out of Stock   |   Dispatched within 24 hours
Want it by Friday 2nd December? Order within 13 hours, 56 minutes and choose Mainland UK - Next (Working) Day at checkout.

Earn when you purchase this product
Loading...
Interest Free Finance AvailableFrom $48.15 $48.15 per month

The Red Paddle Co 12' Voyager board when inflated measures -

The Red Paddle Co 12 ft Voyager package when packed in its Red Paddle Co. Back Pack with pump and three-piece alloy paddle measures -

The Red Paddle Co 12'0 Voyager is all new for 2023 and a very welcome addition to the hugely successful Red Paddle Co Voyager range. When compared to other Voyager models, the 12ft Voyager has been designed for the touring paddler weighing upto 110kg. Featuring the narrowest width in the Voyager range (28 inches) the 12'0 Voyager is more easily managed not only to and from the water but also on it to. Tracking also improves as a result of this reduced width keeping the nearer the centreline of the board. This paddleboards board thickness at 4.75 inch also plays a key factor in how it feels and paddles on the water, lowering a paddlers centre of gravity as well as reducing how much it is impacted by the wind. The overall outline of the 12’ Voyager extremely parallel resulting in a much wider tail ensuring that this inflatable SUP remains stable in a broad range of conditions for a wide range of paddlers.

The Red Paddle Co 12 ft Voyager shares many of the features found in the rest of the Voyager range such as their V-hull design, twin fin system and RSS battens. The proven displacement V-shaped hull on the nose of the Voyager, breaks the surface tension of the water and keeps you gliding through your paddle stroke. This ensures you remain as efficient as possible while also adding tracking. Glide is further enhanced by their 'Speed Tail'; this ABS rail at the tail of the board provides a very clean release from the water. The twin fin system further improves tracking when paddling as well as provides a stable platform when out of the water enabling you to easily load additional gear. Red’s patented RSS batten system is a main stay of many performance models in the range. This simple system stiffens the board immensely particular when under load reducing flex in the core standing area.

The Red Paddle Co 12 ft Voyager also features the new and improved cargo system offering three adjustable bungee straps at the nose section, additional forward carry handles set at the rails ahead of the main standing area as well as four D ring mounting points at the tail of the board should you wish to carry more gear.

All Red Paddle Co 2023 models use Red Paddle Co ATB Transformer Board Bag; the totally redesigned all terrain wheeled backpack that features their bagless carry system. This two-part bag system means you can access more remote waterways without the need for a bulky bag and just take your paddle and pump.

SKU:
Be the first to review 12 ft Voyager. Write a review
Contact us with any questions you have about this product